The shift to DC will change asset management

In most OECD countries, pension assets for defined contribution plans now exceed the assets for defined benefit plans. This trend has far-reaching implications for asset managers as investment strategies have to be calibrated to fit the changed nature of the liabilities.

Lifecycle strategies have been firmly established as the international best practice investment strategy for DC plans. On the other hand, traditional balanced investment strategies are geared to the risk appetite of the sponsor and/or the members, and in principle remain unchanged over time.

In the US, where portfolio construction is the individual responsibility of the employee, target-date funds have become the dominant investment style and now account for 80% of all participants and 30% of the assets in 401(k) plans.

Chart 1: Percentage of pension plans by Assets under Management 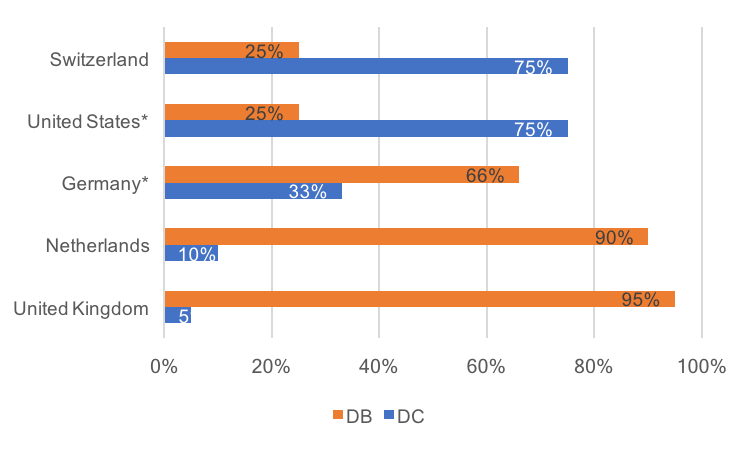 Chart 1 shows the percentage distribution of the types of pension plans in terms of assets under management for some countries. In Switzerland, almost all pension funds have now switched from DB to DC, with DC assets accounting for 75% of the overall AuM. In the US, which accounts for around 65% of pension assets in the OECD, only the public sector is still providing DB plans. In the private sector, DC plans dominate; DC assets have exceeded assets in DB plans since the mid-1990s. DC plans currently account for 75% of all AuM in this sector as well.

The OECD's current 'Pension Market in Focus' gives a similar picture for large parts of the world, as does EIOPA's latest 'Consumer Trends Report'. The precise figures differ in all statistics depending on design and focus of the survey, however, the basic trend of a restructuring towards DC is solid. 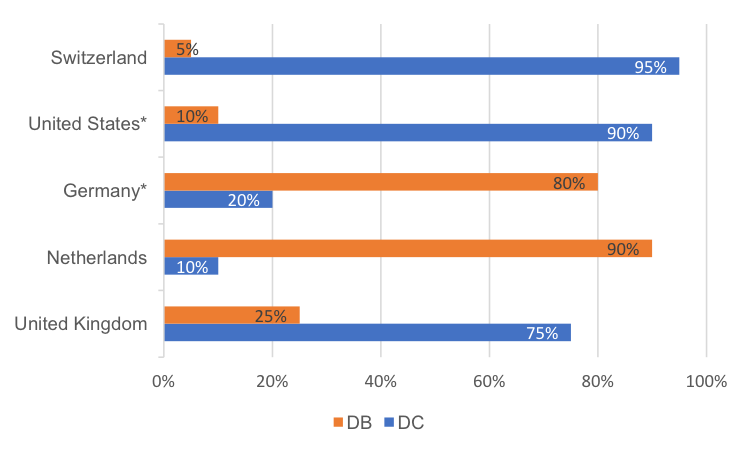 Even the remaining 'DB islands' which - according to official statistics - include Germany, the Netherlands and the UK, are clearly heading towards DC. These shifts are most visible in the UK. Chart 2 shows the percentage breakdown of plan types by members. In the UK, 75% of all members have a DC pension, because of the successful introduction of automatic enrolment.

Since the introduction of auto-enrolment, the number of employees in the private sector with a workplace pension plan has risen from just over 2m to almost 20m. A corresponding shift in the AuM will follow over time. As in the US, DB plans are only relevant in the public sector.

The new DC plans are largely managed by specialised master trusts. In addition to the state-sponsored NEST, there are 36 other master trusts sponsored by insurers, asset managers or consultants. The default investment strategies offered are lifecycle strategies.

Netherlands: Will a choice of lifecycle strategies be offered?

The Netherlands is in the middle of this restructuring from DB to DC. The legislative process will be completed this year. The changeover of the pension contributions is expected to take place between 2023 and 2026. With a series of reforms since the late 1990s, the Netherlands has turned its original DB system into a DC system.

Collective defined contribution refers to a system with fixed employer contributions, (theoretically) flexible employee contributions, collective investment and promised pension benefits, the exact amount of which ultimately depends on the coverage ratio of the pension fund. In addition, individual DC plans already exist, but these account for only a small part of the overall AuM. In the new system, there will also be a collective DC plan. The concrete design and the implications for investment are currently the object of heated debates in the Netherlands.

However, it can be safely assumed that the preferences of the individual age cohorts will be taken more into account in the future. One option that is emerging is to offer members a choice of different lifecycle strategies with different risk profiles.

Since the Netherlands wants to convert not only future service but also past service, almost the entire pension market with investments worth EUR 1.7tn will change from DB to DC. The Dutch central bank found last December that 85% of the 161 Dutch pension funds that are currently still in operation have started preparing for the new system.

The shift from DB to DC is also taking place in Germany, but there is very little transparency about this, as occupational pensions are insufficiently covered by statistics. This holds true especially for the large employer-financed schemes, which are maintained primarily by companies in the traditional industrial sectors such as metal & electrical or chemicals.

Starting in the 1980s, employers have gradually derisked their pension plans. Around the turn of the millennium, serious restructuring towards DC began. Since pure DC plans are not recognised as such for tax purposes in Germany, employers developed a German DC alternative; with fixed employer contributions, pension benefit linked to the investment return of the pension fund, and often instalment payments instead of annuities, these pension plans should however firmly be regarded as being in the DC world.

Interest rate guarantees in the savings phase used to be meaningful, but they have gradually been lowered towards zero in the current low-interest phase. The single remaining DB element that still exists today is the employer's obligation to make additional contributions at the start of the member’s pension should the member’s pension pot fall short of the guaranteed level. This could happen in case of market turmoil without proper risk management.

Avida International recently conducted a survey among occupational pension consultants and actuaries to determine the extent of these restructurings of pension plans. Based on this survey, we ran simulations on further market trends. Currently, the largest share is still accounted for by DB plans. These are mostly legacy plans covering  pensioners. Young members are enrolled in the new DC plans. According to our simulations, the German occupational pension market will quickly pivot towards DC.

This naturally has repercussions on the sponsors' demand for investment products. We are increasingly observing tenders for lifecycle strategies.

We recently conducted a market study for a large asset manager on lifecycle strategies, where we ran various scenarios for further market development. In all scenarios we came to similar conclusions: the German pension market is becoming more DC-heavy, and lifecycle strategies are increasingly becoming a very interesting growth segment for asset managers. The only question is how fast this will happen.

If you would like to hear about how Avida International can help your organisation further understand this shift please get in touch with me: dorotheefranzen@avida-int.com

We would be more than happy to help!

Time for a Plan B? Discussion on the Aon/WTW merger

Abstract: We at Avida see significant opportunity within the German market for Institutional..