The following article was originally published in Institutional Investor on April 19th 2021.

It’s not surprising that soon after Sally Bridgeland ended her term as the first female Master of the Worshipful Company of Actuaries in 2017, she was named a Role Model of the Year in the inaugural Women in Pensions Awards.

Looking like medieval royalty in her scarlet robe with fur trimming, she and fellow Masters of the modern and ancient guilds joined in ceremonies in St. Paul’s Cathedral and the Guildhall, casting the Livery’s votes in the ceremonial elections for Lord Mayor and sheriff in the City of London. For several hundred years, this crowd was all male. But Bridgeland and other lady Masters have been changing that picture. And young women with professional aspirations have taken note.

Becoming a Master was just one of the pioneering roles that Bridgeland has assumed during her three decades in the UK’s pension world. These days, she’s a Senior Advisor at Avida International, a consulting firm. She’s also a non-executive director at Royal London, the UK’s largest mutual insurance company and chairs Impax Asset Management Group as well as the Local Pensions Partnership’s FCA regulated investment company. She only recently stepped down as a pension trustee for Lloyds Bank and NEST Corporation, the largest UK pension fund by members. On a voluntary basis, she’s also a member of the prestigious Royal Society’s Advisory Committee on Mathematics Education and chairs the Strategic Advisory Board for the Centre for Mathematical Cognition. Oh, and she’s a trustee of the RAF Central Fund and an Honorary Group Captain in the Royal Air Force. In January 2021, she joined the board of the Pension Insurance Corporation.

How does she manage all this and still devote what she calls significant time to her family and to the arts? “It requires being an incredibly organized person. I carefully schedule all the things that matter to me, including holidays, exercise, and culture.” While some might find her array of responsibilities dizzying, she says, “I find the variety energising.”

Fortunately, the pace varies, she adds: In March, for example, “work is like exam season at school, and you’ve got a lot to do. But then there are quiet times.” And during those intervals, she busies herself “coaching people, mentoring people, building networks, and finding out about what’s happening at different organizations – and all that feeds into a virtuous circle of knowledge for my non-executive roles.”

The quieter non-executive seasons also make space for project work with Avida International, a consulting firm whose focus is “helping pension funds to be more effective operationally,” she says, “and that usually comes down to governance, and the inhouse team, and advisers really getting that jigsaw puzzle working well.” She adds, “Sometimes it’s like marriage counseling. While we have a peer group database to benchmark governance, if there are tougher relationship issues, they’re banking on my experience across the different roles I’ve played: consultant, inhouse chief executive, and pensions trustee.”

She started amassing her body of pension expertise after graduating from Imperial College with a degree in mathematics and joining Bacon & Woodrow, a consulting firm, to training as an actuary. “My original role was advising on the liability side of pensions and focusing on how much goes into the fund, rather than how it’s invested,” Bridgeland explains. But as the firm evolved into what is now Aon, she took on increasing responsibility, eventually heading up the Financial Institutions practice and overseeing research on investment managers.

After two decades as a consultant, in 2007 she was hired to be CEO of the BP Pension Scheme. According to Bridgeland, “The journey there was de-risking the funding and investments. My focus was on not taking unrewarded risk, so while we started various specific moves while I was there, my biggest contribution was developing the blueprints for how things could move in the future as the pension fund matured.”

In running a pension fund, “I think my natural predisposition is probably towards inhouse investment management, and that’s driven by the alignment of interests,” Bridgeland says. As for actually choosing investments, however, she cheerfully admits, “I’m pretty rubbish on taking views on markets.” She adds, “I’m very much a long-term investor. My time horizon is longer than most. I’m thinking about risks all the time. It’s my actuarial heritage: It’s knowing the role that downs as well as the ups in the markets can play.”

She’s known as something of a contrarian on many investment issues, having coined the phrase “responsible investment” in 2003, well ahead of most. She doesn’t flinch at being different, describing herself as a round peg in a square hole “I was born that way,” she says. “I learned it’s best to play to your strengths and differences in styles.”

In retrospect, she says, “I think my early formative years prepared me well for all this. When I was at school, which was a local state school, the headmaster there alerted my parents to the fact that I was good at maths.” (Maths is British talk for what other English speakers call mathematics.) He also told her parents that girls who were good at maths may find it hard in classes mixed with the boys, she recalls, and “he said it would be better for me to go to an all-girls school where it was OK for girls to be good at maths.” The problem with that was “when I left an all-girls schools, I hadn’t had a lot of experience doing maths among men, and at university I still believed that girls couldn’t do maths as well as men. But my first year, surprisingly I was top of the class.” Bridgeland says there’s a lesson there for other women regarding self-confidence.

Another lesson is that women need mentors, she says, noting that she’s had several, “and in the early years they were all men, which I think is a good thing. It helps to understand how you are seen by men if you’re in a male-dominated environment. I think it’s really important to get that perspective. While women look to me as a mentor, I’ve also played that role to men who are struggling with a desire to fit in. Understanding other perspectives is important.” Inevitably, her strongest supporters were often “men who recognized that I could add something different.” Bridgeland says, “I think women have a tendency to rely too much on qualification and less on networks – I know I did. Don’t underestimate the importance of networks of people who know you when you need help.”

After years of often being the only woman in the room, Bridgeland says women have become increasingly visible in her world. For example, “at the Local Pensions Partnership, you’ve suddenly got whole groups of women rather than just one or two scattered here and there who are interested in following the trail you’ve blazed or path you’ve found,” she says.

Bridgeland’s a believer in the importance of harnessing “neurodiversity,” and says “it would be a huge opportunity missed if we didn’t draw in different skills and styles” by, for example, “playing to the strengths of those who are good at pictures and ideas, not just words and numbers.” But while women have been advancing, she laments that COVID is having an unfortunate impact: “When you’re trying to work in a lockdown and also homeschool children and look after older parents, data shows that women have borne the burden and that is a step backward,” in terms of their access to the workplace.

Bridgeland was born in the small hamlet of Tokers Green in South Oxfordshire, just north of Reading. “My parents worked for the British Rail, and I’m one of the first of my family to go to university,” she says. At Imperial College she met her future husband in the dramatic society: “My parents had actually met in British Rail Dramatic Society, and my mum said, ‘Why don’t you join the drama club?’ so I did. I did a bit of acting. There weren’t very many women, so sticking to costume design and backstage wasn’t an option. But it prepared me for taking to the stage at future investment conferences! After university, I went down the actuarial route, and my husband carried on being an actor.”

Her life changed when she fell off a cliff while skiing in Squaw Valley, California, in 2003. “I don’t recommend it,” she says drily. “It took me 10 years to get over the nightmares and waking up in the middle of the night.” But, she adds, “It made me think hard about what I’d done in my life, and although those around me would have been proud of what I’d achieved, for me, my biggest failing was not being a mum. Despite a decade of IVF, it had been a disheartening story of continual failure; the accident made me reengage with that and take some risks, and a year later I was pregnant.”

Becoming a mother at 39 was not easy, but, ever the optimist, she adds, “what was good was I’d had enough of a career to be able say, ‘I want to work, but only on my terms,’ which was three days a week. “It wasn’t a normal thing to do,” Bridgeland adds, “so people thought I’d miss out on the politics and things that were important, but I knew that would be the right balance for me.”

She’s clearly devoted to her son who is now 16 – and six foot one. “He’s gone from being shorter than me to taller than me” during the pandemic, she says. In Bridgeland’s view, “one of the more important trails I’ve blazed is trying to mix work and family. I hate the saying ‘work/life balance.’ They’re both complementary factors. But there’s no reason why we can’t do bits of both and do them really well.” 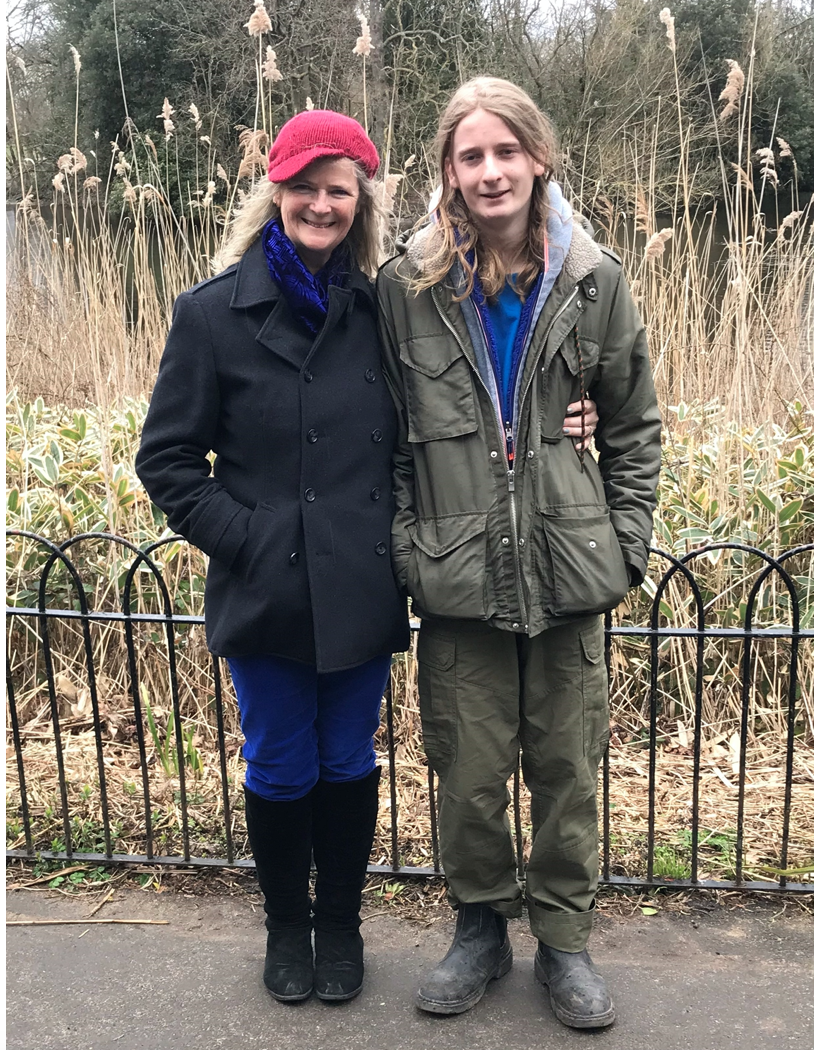 Bridgeland still skis, and she has wide-ranging cultural interests. “One reason I love living in London is the music – classical music, rock, jazz. Before lockdown rarely did a week go by when I didn’t go to a concert.” She’s also big on art galleries as well as wandering around museums. She values “being in those spaces where there are visual inspirations; even if you don’t like the style, you learn things.” She lives in South London, cycling distance from many of her favorite haunts. At home, “I like jewelry and clothing design. It may be rare for actuaries, but I’m a bit of a frustrated designer.”

a beacon for women

She’s been more than a bit of a designer for pension funds. “Most of my career has been seeing pension funds grow and then mature. My interest is in helping them to age gracefully, and that’s both in the private sector, but also, we’re seeing steps in that direction on public pensions in the UK.” As she goes about her work, she’s been a beacon not only for pension funds but for many British women who have wondered if there could be a place for them at the financial world’s tables. 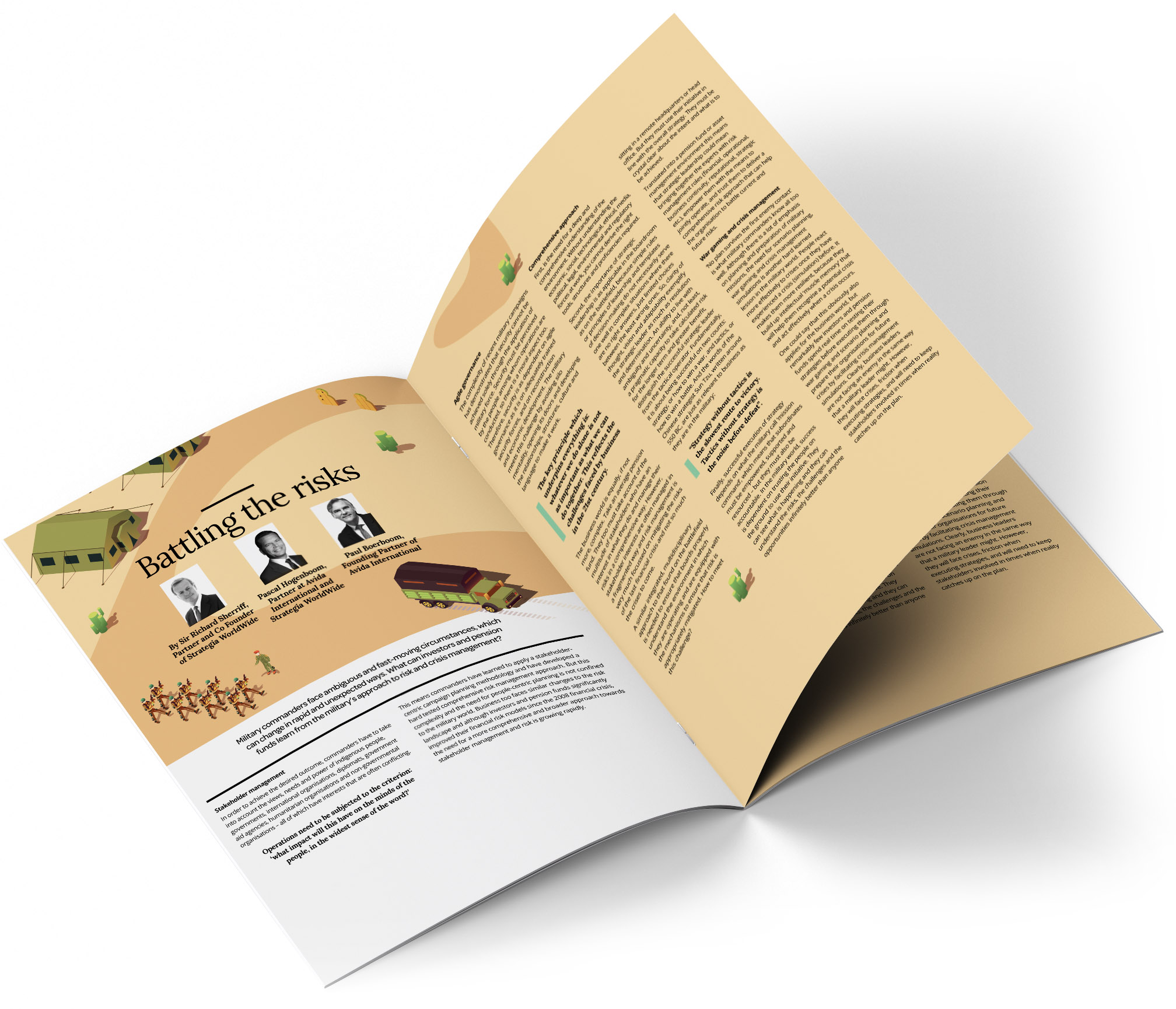 Primary content offer designed to appear as a book or magazine.

Have you thought about your provider reviews? It can be done virtually you know!

This blog looks at a case study of the virtual evaluating process and provides insight into how..

I have devoted a significant part of my career advocating strong governance in the financial..

I’m from The Netherlands, and whilst I live and work in the UK I continue to follow the fortunes..